NO ETF DECISION YET, BUT GEMINI-BACKED BITCOIN INTEREST ACCOUNT IS LIVE

Even the greatest proponents of Bitcoin tend to admit that the number one cryptocurrency is unlikely to replace banks anytime soon. However, it certainly has fiat currency in its sights. With the launch of two high-interest Gemini-backed cryptocurrency accounts in Bitcoin (BTC) and Ethereum (ETH), maybe the banks should be worried after all.

Since the cryptocurrency market lost around $400 billion from its market cap in one year, high-interest rates on a dwindling investment may fail to appeal.

However, the Bitcoin and Ethereum interest accounts were launched yesterday via BlockFi crypto lending platform. In its private beta in January, the company attracted more than $10 million in deposits from institutional and retail investors alike — showing a clear demand for its services.

BlockFi also raised a massive $58 million in several rounds of funding, offering loans starting from $2,000 against BTC, ETH, or Litecoin (LTC) with a 4.5 percent interest rate. The company also has plans to launch a cryptocurrency-backed credit card.

However, it’s the 6.2 percent interest on the Bitcoin and Ethereum accounts that will really capture attention. The average interest rate in U.S. bank accounts is less than 1 percent. 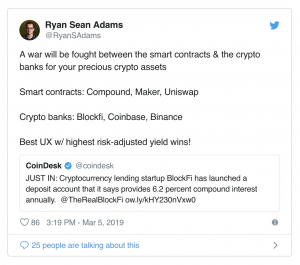 BlockFi is the first crypto challenger bank. Bitcoin and crypto lending, especially to retail investors, is a nascent market… It has though been pushed on by institutional interest over the last year or so.

THE WINKLEVOSS TWINS COMPANY WILL ACT AS CUSTODIANS

The Winklevoss twins’ Gemini trust company will act as account custodians. They may not have their Bitcoin ETF approved yet, but the brothers refuse to be left out of this growing market.

The high-interest accounts will be available not just in the US but to investors worldwide. Clients can withdraw their funds at any moment. There’s no lock-up period if you find HODLing in the crypto winter is getting too stressful.

After all, while the company insists the market is “nascent,” it’s also going through its longest bear market on record. That’s hardly going to be attractive for mom-and-pop investors right now.

The BlockFi CEO is confident that things will turn around, however, stating that “Bitcoin will end this year higher.”

While the bear market drags on, many investors are hopeful that institutional funds flowing into cryptocurrency are a good sign. 2019 will be the year that Bakkt and Nasdaq enter the market.

Many hope that significant investment from Wall Street will boost cryptocurrencies to their glory days of 2017.